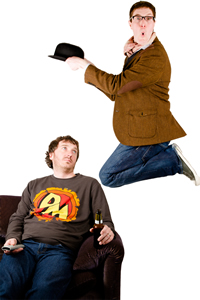 Kris Dyer and Dave Marks have performed three sell-out runs as Nice Mum at the Edinburgh Fringe (Pleasance, Gilded Balloon & Underbelly) and on the London circuit for many years. They used to host their own regular comedy night at the Etcetera Theatre, called Nice Mum Etc., which featured the best in new sketch & double-act comedy.

Their writing credits include three series of BBC Radio 2 sitcom On the Blog (which they created) starring Simon Greenall, Caroline Quentin and Andy Taylor, That Was Then This Is Now with Richard Herring and sketches for Andy Parsons and Henry Naylor.

Praise for previous Nice Mum shows: “Genuinely funny” Scotsman, “Brilliantly stupid” Edinburgh Evening News, “The audience never stopped laughing” Three Weeks “Surreally brilliant” List, “It shouldn’t work but it does” Evening Standard, “One of the funniest acts of the Fringe” Stage, “There is no significance to the name” Daily Mail.