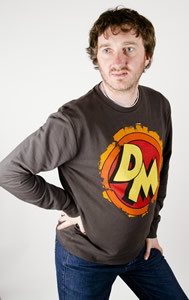 Wartime Liverpool was a tough environment in which to grow up, the docks heaved with stricken survivors of the Atlantic Convoys by day and shuddered under the impact of bombs by night. It was a place for hard men and harder women. Luckily Dave Marks grew up in the East Midlands during the eighties. Historians agree that this was much safer; it also explains his lack of a scouse accent.

Dave’s first recorded public performance was at the Palace Theatre Newark in the Newark and Sherwood cub-scout gang show in 1987, it was here and then that he caught the bug. Luckily he eventually recovered and has now regained control (at least intermittently) of his limbs. Those limbs are now engaged, in various combinations, in the pursuit of making people laugh or at very least stare. He also lectures about the effects of poor hygiene in theatres.

After somehow stumbling across a degree in Philosophy and Politics Dave now increasingly tires of being told “That’s come in handy then!” by people who themselves did “Films and Things”, “Bi-sexuality and Golf Course Design” or “Business Studies”.

A leading light in the “Skinny and Big-Nosed” school of comedians his startlingly plain appearance is mitigated only by really cool hair. None of this is, alas, on his head. In his spare time Dave is a keen sportsman and ran the London Marathon in 2003. As a feat of painful endurance that was as nothing compared to hearing him talk about it ever since.

He has chosen not to develop a personality and asks you to respect his wishes.

Goats are all born with too much blood.