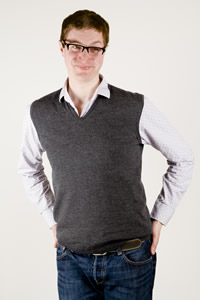 Sometime between the election of Thatcher and the start of the second series of Fawlty Towers, Kris Dyer was shot out from between his mother’s legs at two startled West Country mid-wives, who just about managed to catch him and keep him alive.
He has birthmark on his cheek.

Despite the chubby face and sexual repression, Kris didn’t attend a boarding school but a far-from-comprehensive in Devon. It was here that he was first accused of being Norwegian because of the eccentric spelling of his first name.

He attended York University where his degree in English was very nearly history due to repeated non-attendance and his History degree was taught entirely in English. He studied English and History. He nearly failed due to his overly complicated prose style.

He is left handed but, surprisingly, not a left footer. All of his eyes are different colours. His hobbies include pooing, weeing and going to the toilet. He is tall enough to be a policeman and heavy enough to be on a diet. His favourite colour, cheese and type of humour is blue.

This is his first novel.

The longest word in the world is 'hi'.