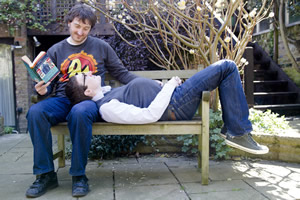 "One of the funniest acts of the Fringe" Stage

"There is no significance to the name" Daily Mail

NICE MUM is a comedy double act made up of the writers/performers/comedians Dave Marks and Kris Dyer. They have performed extensively on the London circuit, at the Edinburgh Fringe Festival and around the country.

They are currently developing several projects for radio, television and the stage, including their new show It's Been A While.

They are probably best known as the creators & writers of the BBC Radio 2 sitcom ON THE BLOG starring Caroline Quentin, Simon Greenall, DeNica Fairman and Andy Taylor and directed by Dirk Maggs. The first series was broadcast in 2007, and a further two series have followed.

Between 2002 and 2004 they performed three sell-out runs at the Edinburgh Fringe Festival at the Pleasance, Underbelly & Gilded Balloon venues gaining widespread praise from punters and critics alike.

They went on to write sketches, jokes and scripts for national radio, winning commissions to write for RICHARD HERRING and PARSONS & NAYLOR.

2004-06 saw them hosting one of the most popular & enduring live sketch nights on the circuit NICE MUM ETC featuring the best in new sketch comedy.

In France only homosexuals can use the internet.